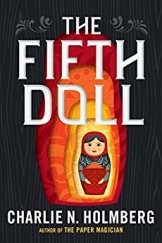 It’s not often I review authors, but Charlie N. Holmberg intrigues me.  If you remember, the first five chapters of Magic Bitter, Magic Sweet hooked me over Christmas break, only to leave me disappointed when the novel went sour.  Another five chapters at the end of a Dark Magic ezine hooked me into The Fifth Doll.  While I enjoyed this book significantly more than Magic Bitter, Magic Sweet, The Fifth Doll still felt like it could have been tighter, stronger, and edited a bit more.  If there is one thing about Holmberg, it’s that she can write a hell of an opening to her novels.  With the second one I picked being so much better than the first, I dropped into The Paper Magician series.

It is in this series that Holmberg seems to find her stride as an author.  Gone are the random acts of violence and plots holes that leave you scratching your head and enter a very very very young adult genre book of magic, love and adventure.  (And by very, I do mean this book would probably be a crowd-pleaser for the female pre-teen types.)  The first book in the series, The Paper Magician is currently the number one best seller in Teen and Young Adult Historical Fiction on Amazon.

As with Magic Bitter, Magic Sweet and The Fifth Doll, Holmberg builds an entire world with her writing placing magic in London in the late 1800’s and setting her main character, Ceony, on the road to earning her magician-ship via an internship with a very quirky bachelor, Emery Thane.  Ceony, the stereotypical poor girl working her way through the crusts of society with her hard won education, is to learn the magic arts of paper from Emery, who despite his unusual behavior and poor taste in clothes is witty, smart, caring and devastatingly handsome.  As expected, Ceony develops the worlds biggest crush on her mentor, leaving the reader to slog through many pages of teenage angst.  Mercifully, Holmberg spares us the double angst of Twilight and Ceony goes on an adventure with her heart attached to a single male.

Ceony is an unlikely hero and her back story is a bit vague.  We know she has multiple siblings, came from the poor side of town and has a near perfect photographic memory.  However, I would have liked to know more about her beyond the fact that she was poor, incredibly smart and a good cook.   I could have also done without all of the endless meal planning, prep and descriptions of food Ceony gives.  Unlike Magic Bitter, Magic Sweet, where these things had a place, it felt odd to be reading about her culinary skills which never added anything to the actual plot line.

After reading six of Holmberg’s novels, I’ve found she has a way of slipping in random events or traits that never flesh out the character or develop the plot further, they’re just there.  Also, character development is not her strong point.  The Good Guys are overly good and pure and righteous.  The Bad Guys are overly bad and a bit stereotypical.  The characters themselves are never fully fleshed out and developed into living, breathing beings who exist outside of Holmberg’s pages.  Again, perfect for the preteen crowd, not so much for more mature readers.

While Holmberg wraps up The Paper Magician relatively quickly, the other three books , The Glass Magician, The Master Magician and The Plastic Magician all follow the same pattern.  Ceony adventures her way through magic and mystery, using her photogenic memory and quick wit to battle bad guys.  As the story unfolds, Holmberg’s writing improves, however it’s her world building that leaves the reader stunned, rather than her character development.  I particularly enjoyed the way Holmberg took paper and gave it so many different magical traits.

All in all, Holmberg’s writings can be described as immature.  They aren’t emotional inspirations nor are they mentally stimulating.  They aren’t meant to be scrutinized or picked apart or even thought about too deeply.  They are purely enjoyable tales that you can read quickly without much investment.  These are the kind of books I read after finishing traumatic books like The Kite Runner.  Holmberg is a fairly young writer and her skill in world building (and writing the first five chapters) is immense.  With time, I hope she hones her character development and tightens the plot lines, which in my opinion, will take Holmberg from immature flighty young adult novels to something much much deeper and I can’t wait.

Until next time, cheers!