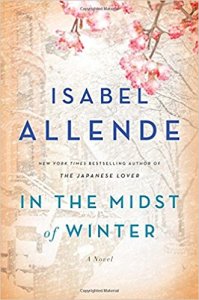 I can still remember reading Eva Luna in high school, buried deep under the covers and reading through the night.  Amazed that a single book could create a world so enchanting and enthralling that it literally wrapped around you in the night, I threw myself into the depths of Isabel Allende’s works; The House of the Spirits, The Stories of Eva Luna, Daughter of Fortune, Portrait in Sepia, Zorro, Ines of My Soul, Island Beneath the Sea.  For years my gypsy life consisted of moving every 6 months, and lugging around a heavy box of books filled with Allende’s works.  For me, Allende is the epitome of an author- she is the Shakespeare to my soul.  It had been several years since I’d lost myself in her world, so when In The Midst of Winter was plopped right into my hands at the library, it was like coming home.

Unfortunately, In the Midst of Winter was probably one of the worst books I’ve read in a while.  All of Allende’s trademark beautiful writing was present.  The wild women, the unlikely pairings, the incredible character development.  Missing, however, was the depth and breadth of the characters relationships with each other, the passion for life and love, and a story so hauntingly beautiful it sticks to your brain like a spiderweb.

While Allende explored the oft ignored middle ages of life and love, the effortless weaving of plausibility and magic that is key in her previous novels was missing from this story.  Richard, Lucia and Evelyn are all written with passion and a deep back story but the circumstances that bring them together are incredibly lackluster and strange.

The story uniting them left me irritated in its lack of reality, lack of depth and the lack of personal relationships developing between the characters.  At no point did I feel like Richard and Lucia were a likely or even possible romantic couple.  At no point could I feel the love or compassion Lucia had for Evelyn.  And while I enjoyed reading the individual chapters narrated by each character and thoroughly interested in the political history of Brazil, I found myself skimming the chapters devoted to the mishaps of this unlikely trio.

For a career spanning over 30 years, Allende was bound to publish a flop at some point.  It’s just hard to imagine In The Midst of Winter being written by a veteran author who penned something as magical as The House of the Spirits as her first novel.

In my devotion to Allende, I immediately checked out “The Japanese Lover” from the library, hoping to ease the disappointment of In the Midst of Winter with what I hope is a novel more aligned with Allende’s previous works.

Until next time my friends.