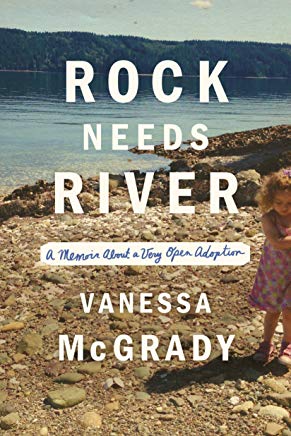 There’s nothing worse than being home sick with the flu on a beautiful day.  I did get in about a million naps and was able to finish Rock Needs River by Vanessa McGrady which had been in my list for a few weeks.

Adoption is something that has always interested me and I was hoping to learn more about the entire process, especially open adoption, which seems to be gaining more popularity as adoption becomes less stigmatized.  Unfortunately, Rock Needs River didn’t really answer any of my questions about adoption or teach the reader anything about the adoption process.  Instead, this book was a hot mess of the author oversharing other people’s lives and it was depressing to read.

McGrady spends the first part of Rock Needs River detailing her love life, failed relationships and desperation for a baby.  This portion felt a bit too personal and unfocused in the broader scope of the book.  The sections about McGrady’s family were also a bit cringe worthy and there was a bit more personal family business shared than really needed to be.

Rock Needs River switches gears about halfway with McGrady’s marriage to Peter, and the eventual birth and adoption of her daughter, Grace.  McGrady and her husband accept a last minute adoption after the birth parents pulled out of an arrangement with another potential adoptive mother, leaving them with just a few weeks to get ready for the baby.  The process of working with the adoption agency, how they found them and how they prepared mentally and emotionally for the adoption was not addressed, leaving a gaping hole in the story from “let’s adopt” to “the baby is here!”.   McGrady also glosses over the first few months to first year of Grace’s life, leaving another hole in the story for how she experienced new motherhood as an adoptive mother.  I was interested to know how this experience of having a baby two weeks after notification differed from a birth mother’s experience of mentally and emotionally preparing for nine months.  I also wanted to know how McGrady’s experience compared with maternity leave, hormones, lactation, pain, and all of the leftover physical symptoms of giving birth.

The McGrady’s and the birth parents, Bill and Bridget, choose an open adoption but never outline or define roles for how the birth parents will interact with Grace, leaving Bill and Bridget moving in and out of Grace’s life rather haphazardly.  When Bill and Bridget end up homeless, the now divorced McGrady asks them to live with her and Grace for a while.  This creates an entire situation of boundary issues, with McGrady essentially taking on a nagging disappointed mother role for two adults who can’t get themselves up to her standards.  McGrady essentially laundry lists the ways Bill and Bridget fall short of her expectations and “the real world”.  A similar approach is taken to her husband’s drinking and their subsequent divorce.

Honestly, I was so uncomfortable reading this book and couldn’t imagine how the birth parents or her ex-husband felt with all of their life history, mistakes and painful decisions laid out for strangers this way.

Despite her attempts to help them with a place to live and the occasional cash, clothes and food gifts after they leave, McGrady treats Bill and Bridget with utter disdain and disappointment.  Her expectations of a couple who knew they were not capable of the stability required to raise a child, are just astounding.  Rather than accepting the gift of her daughter and moving on with her life, McGrady inserts herself over and over again in the birth parent’s business.  Eventually, she follows them to Texas to hear their side of the story, which is disappointingly NEVER shared in this book.  Of all the things I wanted to know about this couple, their decision to give up their child and their experience of the open adoption process, was number one.  McGrady glosses over this section with a quick statement of how they felt used by the adoption agency and then runs away to take a walk.  So disappointing!

The book ends rather abruptly, without any real resolution or conclusion and utilizes an epilogue to update readers on Peter, Bridget and Bill.

After reading this book, I was so upset with how McGrady treated Bridget and Bill that I did a quick google search to see if either of them had given any interviews about the book or the adoption process.  While there wasn’t anything from either of them, I did come across McGrady’s blog.  Several of the stories in Rock Needs River were taken directly from her blog, however the tone in which they were written on the blog was beautiful and loving and a little bit confused on how she could help and what she should do, and most importantly empathetic with their struggles.  In the blog, McGrady comes across as a woman who genuinely cares about Bill and Bridget.  Unfortunately, this love and genuineness was edited out of the book.  Whoever edited Rock Needs River, did a great disservice to McGrady, Bill, Bridget, Grace and the reader.

Until next time, Cheers and happy reading!

One thought on “Rock Needs River by Vanessa McGrady”